Top stories
With the launch of Amazon into the Australian market last year, Lightspeed collaborated with local client Retail Doctor Group, a retail consultancy, to explore the opinions of both consumers and retailers before and after launch. With the media hype and this dramatic change in the retail landscape, it was important to gauge consumer response and the retail impact to help mitigate potential risk for retailers.

Prior to launch, we surveyed 1,000 Australian consumers from Lightspeed’s consumer panel and 200 retailers.

Both retailers and consumers predicted Amazon would make an impact on the traditional retail marketplace, although to significantly varying degrees;

This difference suggested retailers were reacting to their perceptions of consumer behaviours and attitudes and what the press communicated, whilst consumer data suggested a lesser impact.

Post launch, we ran an online follow-up survey with the same consumer and retail split. Phase two was to understand the latest views and behaviours, a pulse check on the new but potentially industry changing launch. We sought to understand consumer behaviour versus the predictions, how and why consumer sentiment and behaviour changed post launch and the next steps for retailers.

The results indicated consumer awareness of Amazon Australia increase from 62% to 79%. This didn’t, however, translated to an increase in spending on Amazon or a decrease in other online or brick and mortar store spending. Retailers indicated they saw less of an impact than expected, where 85% reported to have not seen an impact to their business at this stage.

However, retailers did report to making changes to the way they operate in order to compete. Amongst these changes, 25% reported to have taken steps to improve the instore experience, 21% reported to looking at their online offering and 19% indicated they would look at strategy development. Of those retailers interviewed, 44% indicated they have considered joining Amazon’s marketplace to sell their products.

Results post launch indicated confusion around what Amazon Alexa and Amazon Prime were, similar to what was seen pre-launch. Post-launch, 40% of consumers reported they were unsure what Alexa was, despite the launch in the peak Christmas period, and 41% were unaware of Amazon Prime. Although Prime has only recently launched, consideration for Prime membership indicated a decreased between pre and post-launch surveys, from 17% to 32% stating they wouldn’t consider signing up.

According to respondents, some product categories on Amazon Australia are doing well, notably Books, Electronics and Clothing and Accessories. Awareness that Amazon sells books rose from 69% to 75% between the pre and post survey, and consumers’ consideration to purchase clothing on Amazon increased from 37% to actual usage of 65% post launch. 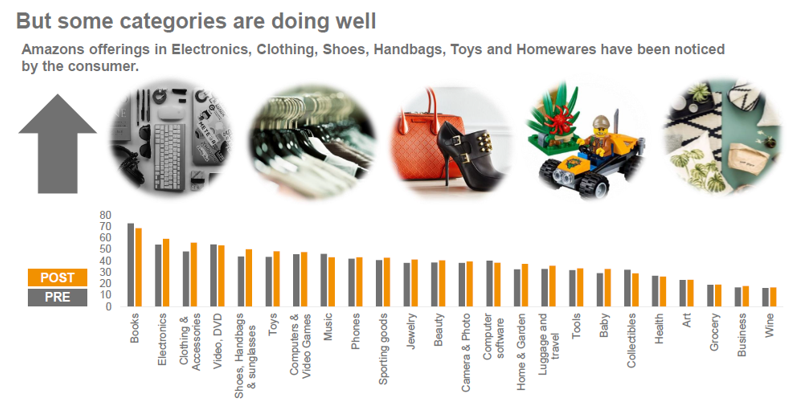 Based on survey results, this is only true for these three categories, with the other categories not seeing similar increases.

Other results indicate that Amazon Australia’s image took a drop post-launch across multiple parameters, including value for money, range of offerings and fast delivery. When asked if Amazon was a brand they could trust, credibility scores decreased post-launch for both consumers and retailers. We saw that brand trust went down for Amazon post-launch, but opinions were not driven by tangible factors, such as ordering experiences or the fulfillment process. The reasons for lack of trust were much vaguer, with 29% simply stating they had a ‘bad feeling’, and 38% stating the newness of Amazon to the country.

During times of dramatic market change, such as the entrant of retail giant Amazon, it is tantamount to maintain engagement across consumer sentiments to monitor changes in behaviour. By understanding customers predicted behaviours, existing businesses can prepare and understand the landscape, including the strength of brand in the current market conditions and places for improvement. In our case of Amazon Australia, these included strengthening customer trust, building on the in-store experience and emotionalising brand attributes.